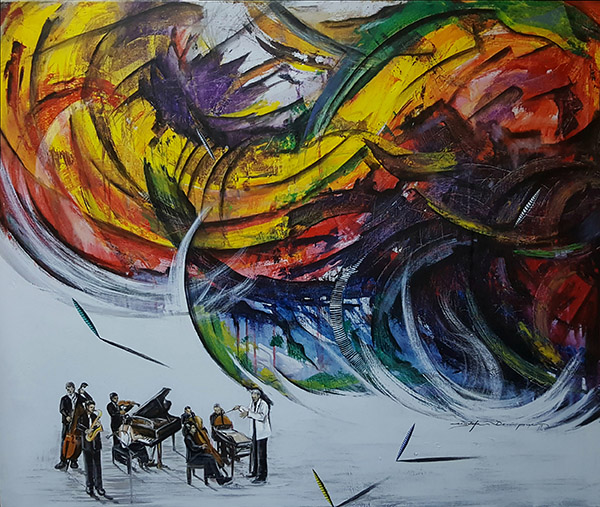 ABOUT THE ARTIST
Artist is an Instructor of Visual Arts in Kayseri. He is also the owner of an atelier that provides education of Art. Demirpençe examines identity, character and time in his paintings.
About Identity and Time Series
Circles question the developments in within time. Circle, as a symbol, is the description of many things. It’s completely different than all other shapes. It explains existence, plurality, dialectic, flexibility, intuition and most importantly circle explains nullity. Social structure, class differences, alienation, sexual differences and various philosophical approaches arouse with circle symbol.
Split of circle in itself symbolizes the experiences of human being after facing different situations. The situations are unexpected deaths, untimely experiences and situations where time never comes. The symbols and writings that around the circle explains the effort to turn back after separating from the whole.
Lines growing from center out to borders are the explanations and interpretations of what life brings to human being. Line goes up to some point and then stops, it also bends time to time. Line depends to circle and vice versa to have a meaning, they have a reciprocal relationship. If circle is the life itself; line is necessary time, space and individual for circle to be formed.
If circle is the book, lines are the words and letters.
The whole book is the identity of the audience.
Exhibitions
2005 Provincial Directorate of Culture and Tourism, Konya
2006 Mevlana Cultural Center
2008 GESAM İstanbul - Ankara - Konya Competitive Exhibition
2009-2012 Deyim Art Gallery
2009 Provincial Directorate of Culture and Tourism, Kayseri
2009 R.D. Art Gallery
2012 Ankart Art Fair
2013 Erciyes University
2013 Sanat Gezgini Beşiktaş Exhibition
2013 Selçuk University
2014 Desen Art Gallery
2014 Melikşah University
2014-2015 Deyim Art Gallery
2015 Swiss Otel, İzmir
Continue...
ARTWORKS
New
Red City Tales